At the time I turned twenty-four, the only thing I was nursing was a half a dozen vodka martinis and inevitably, a hangover. But by the end of the year, I had a full-time milk guzzler attached to my ever-expanding chest. This had not been in my plans for the year, but then, I was never much for plans.

I’ve always been a person who does things in extremes. I partied hard. I enjoyed the high highs of life which meant that sometimes I had to dig my way up from the low lows. So, it would only be fitting that when it came time for me to get knocked up, I’d be unmarried, underemployed, and under the influence. Motherhood would knock me off any high horse I’d ever ridden on. But for me, the work of it came early and it stayed late, like I always had.

It is for this reason that getting pregnant was the best and worst thing to ever happen to me. It was the worst because it altered everything I thought I wanted for my life—freedom, excitement, and spontaneity. It was the best because I eventually found out I didn’t need those things. But the road to get there was hard, harder than I had thought it would be.

Just a week after taking the test (the test which seems to have only one question but really has hundreds: Where we will live?, Can I handle this?, Will we be okay?, Will I make a good mother?), I was hit with the most attention-demanding nausea of my life. Every day was a battle. Getting out of bed was pure pain. No matter what I’d do to stave off morning sickness, I’d always end up on the bathroom floor for hours upon hours. Finally, I’d move to the couch, I’d bring a bowl, and there I’d stay.

Everything in my life shut down. It was as if someone was trying to tell me to make a clean break. “Leave the rest behind. There’s no room for it now. This motherhood thing is gonna get ya.” That god-awful nausea, I wouldn’t wish it on my worst enemy. But maybe in some ways throwing up my stomach lining for the better part of a year needed to happen to me. Maybe it made my first year as a mother less gut-wrenching because I’d already purged up so much of my past life. Maybe it was my detox, my saving grace. Maybe at the time I delivered, most of me was already gone.

For me, pregnancy was hard and terrifying. I’m not sure if it’s like this for most people, but it was for me. I didn’t eat pickles and ice cream. I ate toast and peanut butter, maybe mashed potatoes, or something that might, hopefully, maybe stick to my stomach. I didn’t take the classes or read the baby books. I figured everything would turn out the way it was supposed to (again, not big on the planning).

As my hips grew wider and I peed a little more every time I sneezed, I started to wonder what pregnancy was like for people who actually did plan to be parents and who mapped out every step of the way once they saw that pink plus sign. I’d never so much as thought about being a mother or really knew if I wanted to be one. I wondered how much easier the people who’d desired motherhood for years and years might have it than me, how much more graceful their transitions to being a parent would be than my own. 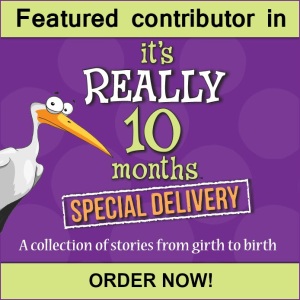 To continue reading my story (and heartfelt and hilarious others) you have to buy the book! 😉